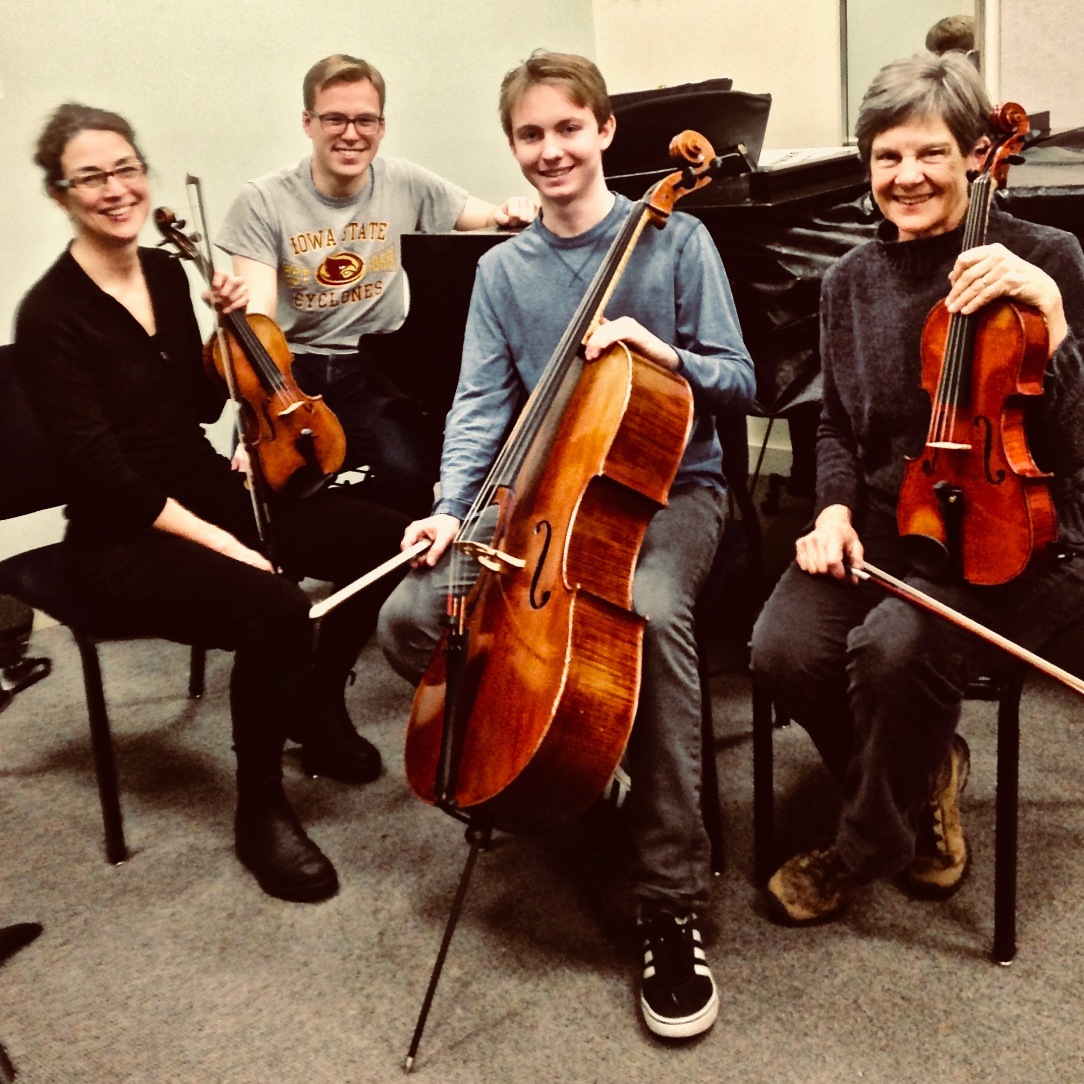 Schumann’s op. 47 quartet is one of the key workhorse pieces in the piano quartet repertory.  The Andante cantabile movement is particularly lovely and beloved. The cello part uses a method called scordatura that requires the cellist to tune the c string down to a b-flat during a rest section where the the violin has a dense patch of notes and the violist has the tune.  The cellist sustains a low b-flat for the last twelve measures of the movement.

Bagatelles are short pieces usually heard in sets, Dvorák wrote his as a group of five for 2 violins, cello and harmonium. The first bagatelle is an Allegretto Scherzando and is loosely based on a folk melody. The work was composed in 1889 for a group of Dvorak’s friends. One of these friends, Josef Srb-Debrnov, owned a harmonium. Some speculate Dvorák arranged the piece without viola  (his own instrument) so he could play the harmonium part.  The harmonium is a small pump organ that generates sound as air flows past a vibrating piece of thin metal called a reed in a frame which sounds quite a bit like an accordion.  This performance will feature piano instead of the harmonium.

The Mahler Piano Quartet in A Minor was composed in 1876 during Mahler’s second year of studies at the Vienna Conservatory. Only the first movement was completed, though a partial sketch of a second scherzo movement was penned.  It appears to have been performed only once during Mahler’s life at Theodor Billroth’s home. Billroth, a close friend of Brahms, was a physician, violinist and pianist and a patron of the Viennese arts scene.  After this informal performance it was sent to a competition in Moscow and lost.  The quartet resurfaced again in New York City in 1973 when it was published and performed by pianist Peter Serkin and members of the Galimir Quartet.  It has recently become more well known following its inclusion in the soundtrack of Martin Scorsese’s film, The Shutter Island (2010).

Originally from Ames, Iowa, Gareth Cordery is a sophomore Music and History double major at Middlebury College, studying piano with Diana Fanning. He has played piano for thirteen years and has performed as a guest soloist with orchestras around the country, including the Champlain Philharmonic here in Middlebury. He has attended festivals and camps at Western Illinois University, Oberlin College, and the Eastman School of Music. Gareth adores chamber music and also plays the cello. He plays in the Middlebury College Orchestra and is an active concertizer around Vermont.

Before semi-retiring and moving to Middlebury in 2015, Carol Harden (viola, violin) was a geography professor at the University of Tennessee. As a young adult, she lived in the western US, where she worked in skiing (ID, UT, CO) and Outward Bound Schools (CO, UT, OR, WA), and attended graduate school (CO) after graduating from Middlebury College (class of ’70, environmental studies/ecology major).  She has played in orchestras and chamber music ensembles in VT, CO, OR, UT, and TN, including the VSO from 1969-1970 (viola) and the Peter Britt Festival Orchestras (OR) in 1982 and 1983 (violin) and currently plays (violin) in the Champlain Philharmonic Orchestra, in addition to fiddling and playing chamber music. She is editor-in-chief of the journal Physical Geography  and chair of the Geographical Sciences Committee of the U.S. National Academies of Science, Engineering, and Medicine.

Violinist Emily Sunderman moved to Cornwall, Vermont in 2004 to help her husband start Twig Farm, a goat dairy and artisan cheese business and so she could play chamber music with her her dad, Bill Sunderman, a violist who retired in Whiting, VT.   She began her violin studies at the Hartford Conservatory in 1973 at age three. She studied violin performance at Hartt School of Music and privately with Arturo Delmoni, participated in camps and festivals including Point Counter Point,  Lucerne, Apple Hill, New England Conservatory and LyricaFest, and studied violin pedagogy at Hartt and Ithaca College.  She teaches violin and chamber music at the Middlebury Community Music Center and maintains an active performance schedule as a soloist, orchestral player and chamber musician.  She directs the Middlebury Chamber Music Festival, now in it’s forth year which will be held this year from June 29 – July 2, 2018.

Cellist Wheeler Jarvis grew up in Baltimore, Maryland and is now a freshman at Middlebury College, studying cello with Dieuwke Davydov.   He began his studies with cello at the age of ten and later attended the Baltimore School for the Arts (BSA). Over the course of his four years at BSA, Wheeler has played for and worked with some of the most accomplished artists in the classical music world including Johannes Moser, Andrew Grams, and Nadia Sirota. In 2015 Wheeler founded the Capra String Quartet, which performed in various settings across Maryland from art openings to dock concerts. Wheeler enjoys playing chamber music and spends his summers as a counselor at the Apple Hill Center for Chamber Music in Keene, New Hampshire.